This page carries reports on our past visits:

Windsor Castle is the largest and oldest inhabited castle in the world, the oldest in continuous occupation and home to some of the greatest paintings and works of art in the Royal Collection.  In the morning we had a lecture which traced the development of the Castle from a medieval fortress to a baroque palace in the reign of Charles II, and its transformation in the reign of George IV into the magnificent palace that it is today.  Then came an account of the Great Fire of Windsor in 1992 and the restoration after the fire, the challenges faced by architects and craftsmen involved and how the solutions they arrived at combined traditional skills with modern technology, making the present reign along with those of Charles II and George IV a key period in the Castle’s post-medieval development.

After a quick lunch we went into the Castle itself.  Our first stop was St George’s Chapel – founded by Edward III in 1348 as a self-governing community of priests and laymen dedicated to daily prayer for the Sovereign and faithful.  The present building was begun by Edward IV in 1475 and finished just over 50 years later by Henry VIII.  St George’s is the burial place of 10 monarchs, it is also the home of the Order of the Garter – the oldest order of chivalry in the world, founded by Edward III in 1348. Today, the Order consists of The Queen, The Prince of Wales and 24 Knight Companions.

We then went in the Castle itself. Firstly we saw Queen Mary’s Dolls House designed by Edwin Lutyens and then the State and Semi-State Apartments.  Having seen photos of the fire it was amazing to see the rooms that had been so badly affected restored to their former glory and in some cases improved.  We had plenty of time to wander through all the rooms and to soak up their glory. 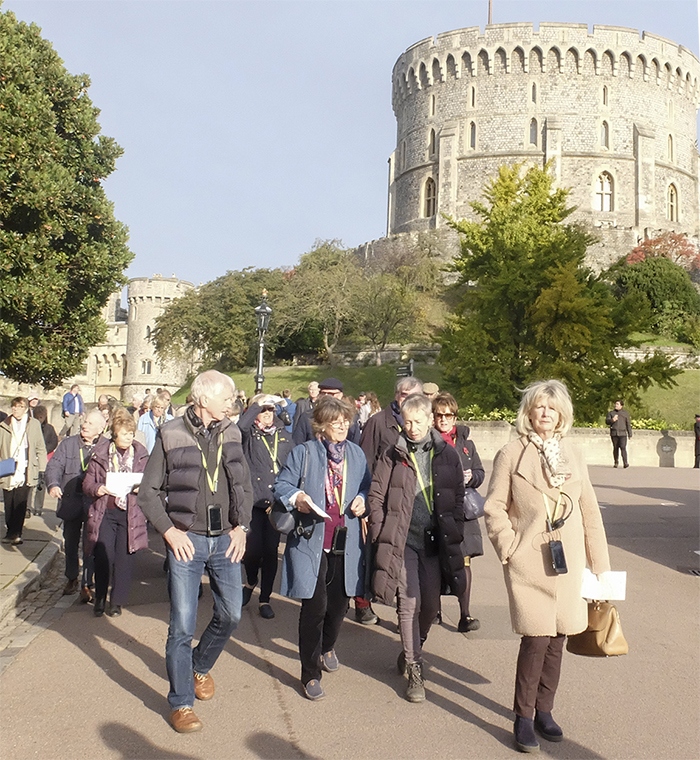 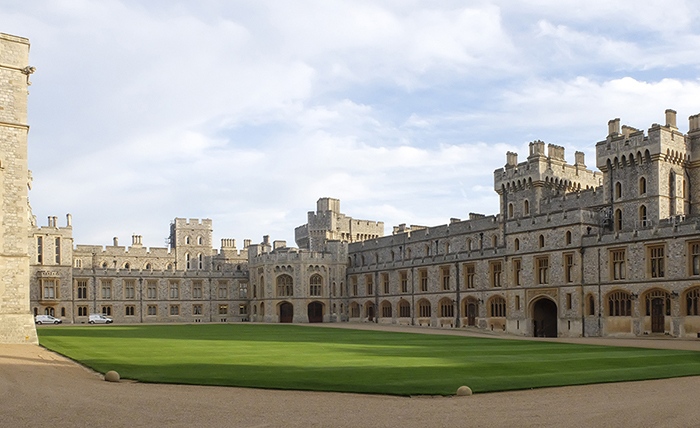 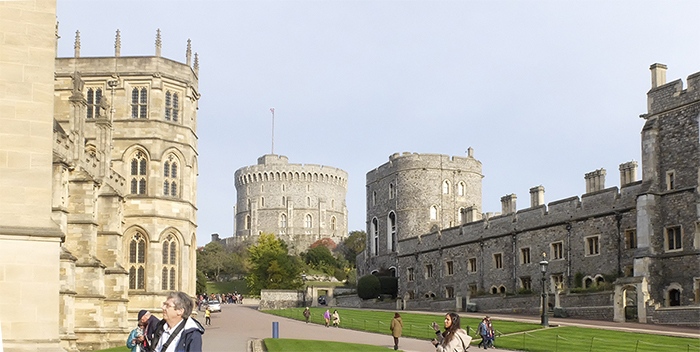 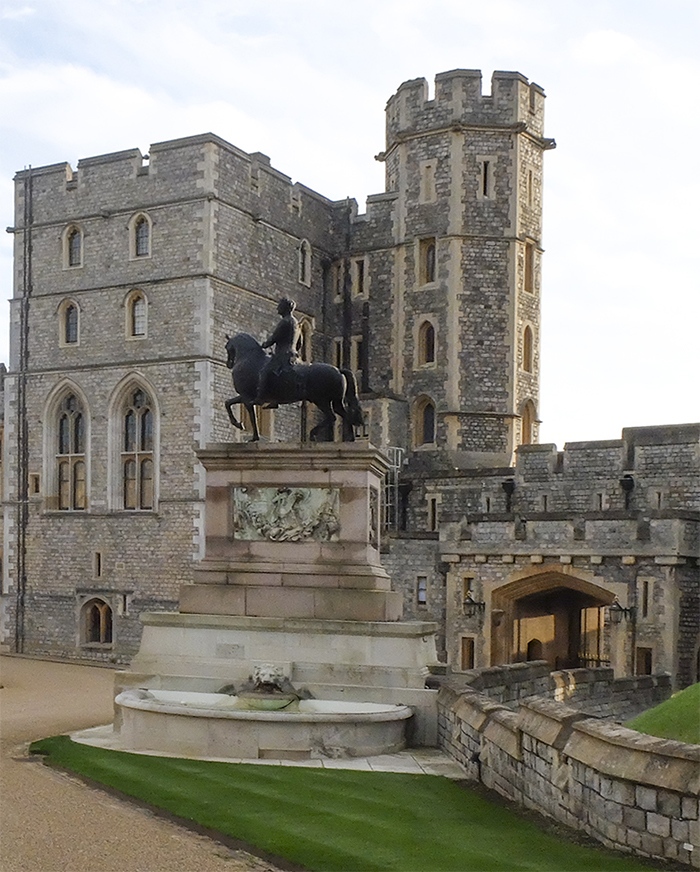 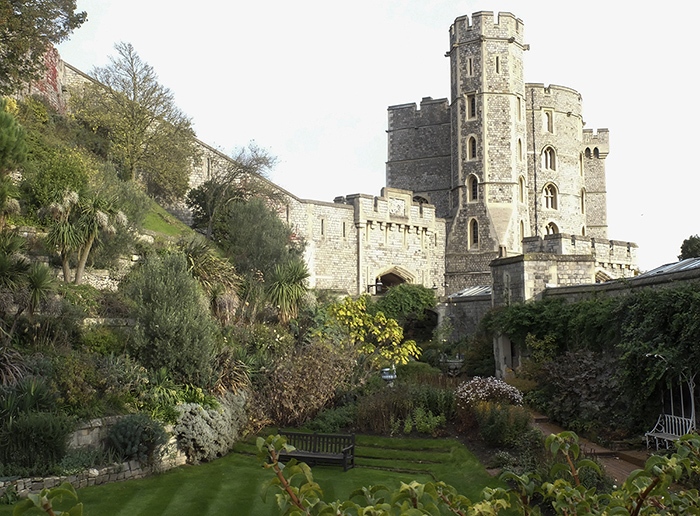 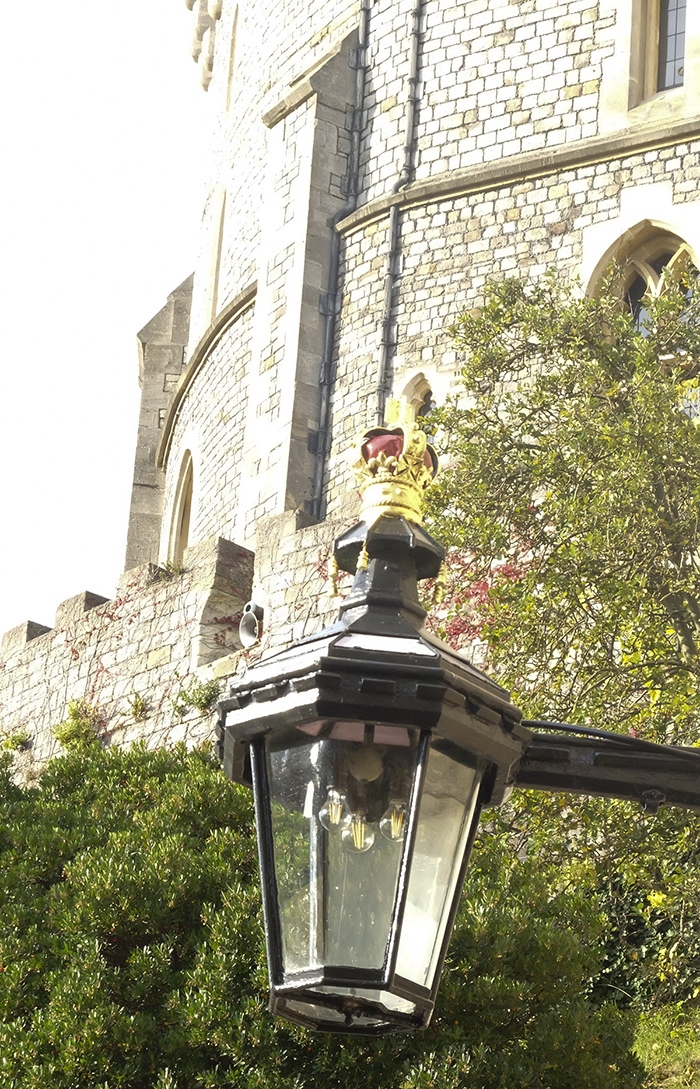 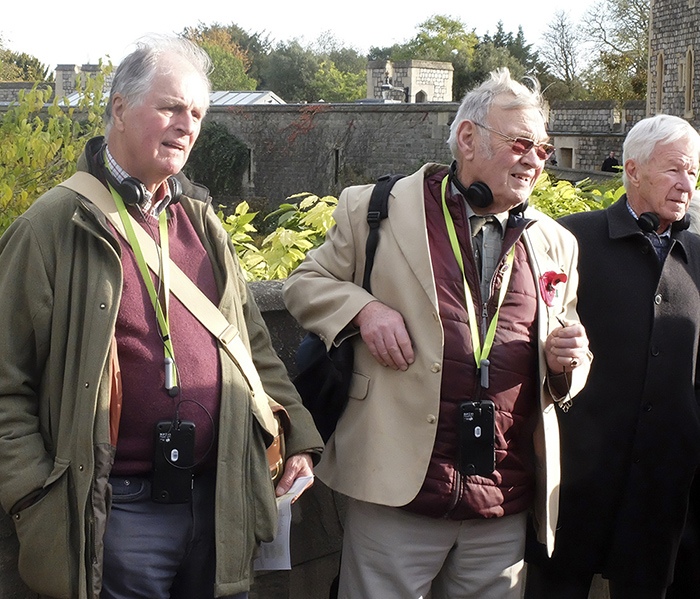 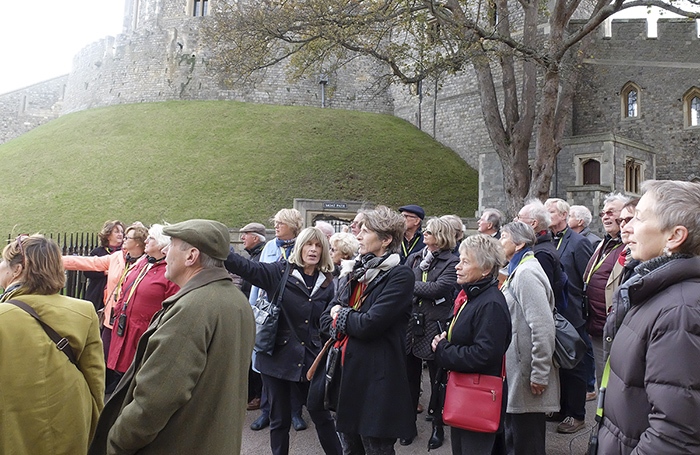 This year 50 of our keen gardening members enjoyed 2 full day visits to 4 very lovely gardens and the bonus of a National Trust house – Barrington Court, the first property taken on by the NT in 1907.  Originally built in the mid C16  the Tudor manor house fell into considerable disrepair and part of it was restored after the first World War by Colonel Lyle of sugar frame, who leased it as his family home and installed magnificent wall panelling and staircases.  Also renovated was the garden, laid out very attractively by designer Gertrude Jekyll in Arts and Crafts style .

From there, after sandwiches in a local pub, we visited a very cleverly laid out and different style of garden at Bradon Farm, created over the last 15 years with considerable panache, awash with box and yew hedging, lime avenues and intricate detail.   Both gardens were near Ilminster in Somerset.

Later in June we also saw a contrast in planting and design with 2 more local gardens in Doynton.  The Old Rectory immaculately laid out in more formal garden “rooms” nearer the house including an expanse of water surrounded by clipped hornbeam, gradually relaxing through other sections into a less formal and delightful kitchen garden area.  Doynton House in the afternoon offered a more relaxed and in some ways more naturalistic style of planting, with a lot of colour but all the privately owned gardens visited gave us ideas to copy and we were very grateful to their owners to have the opportunity to visit them. 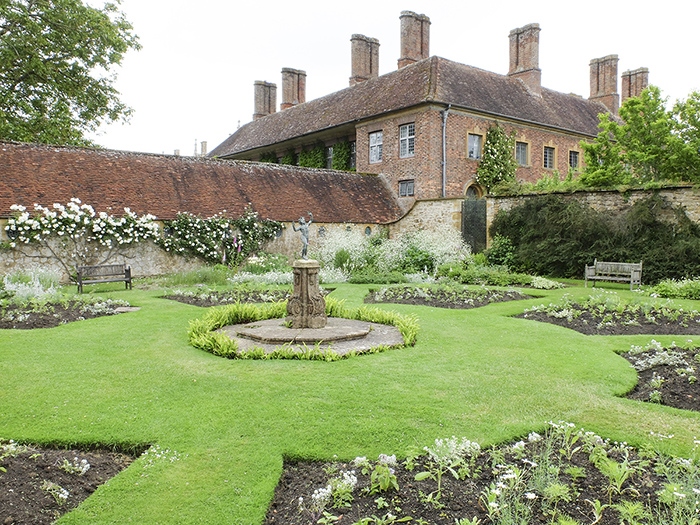 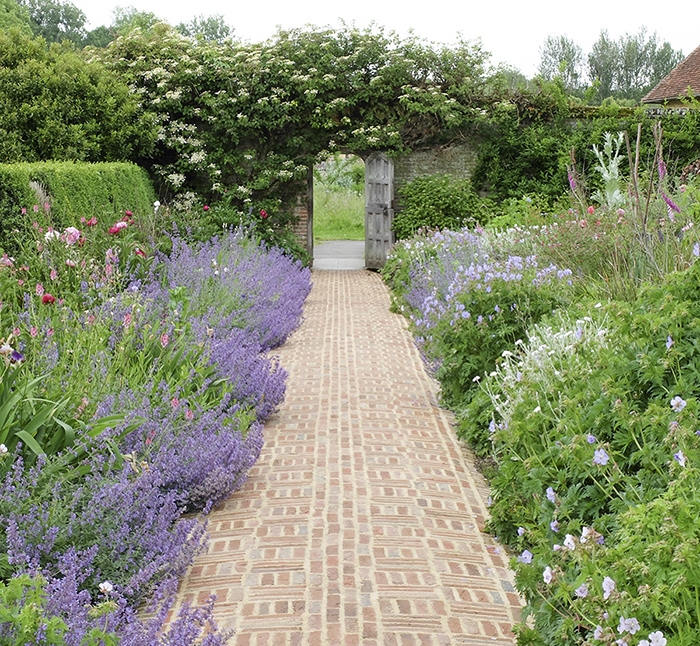 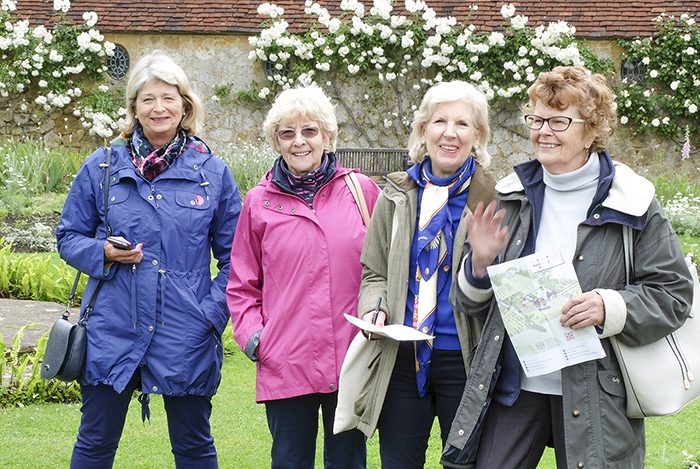 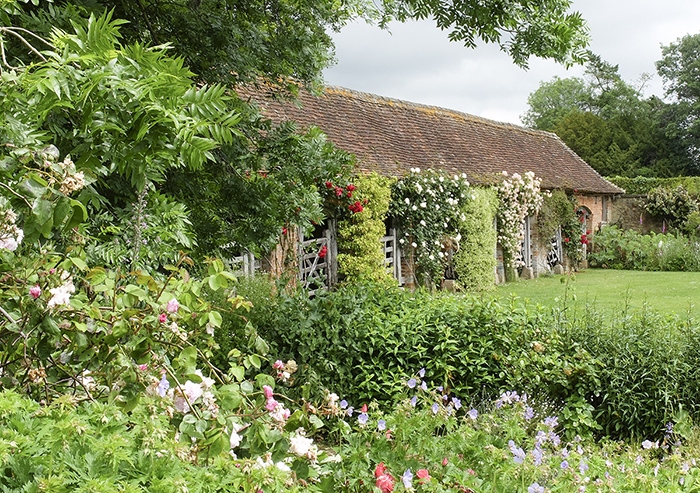 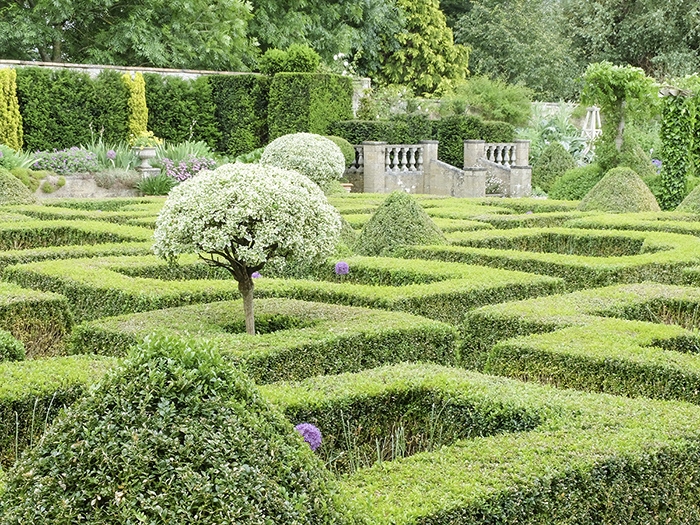 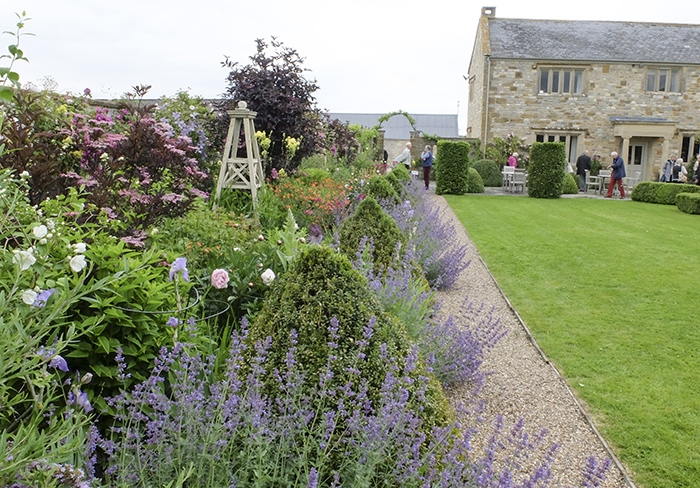 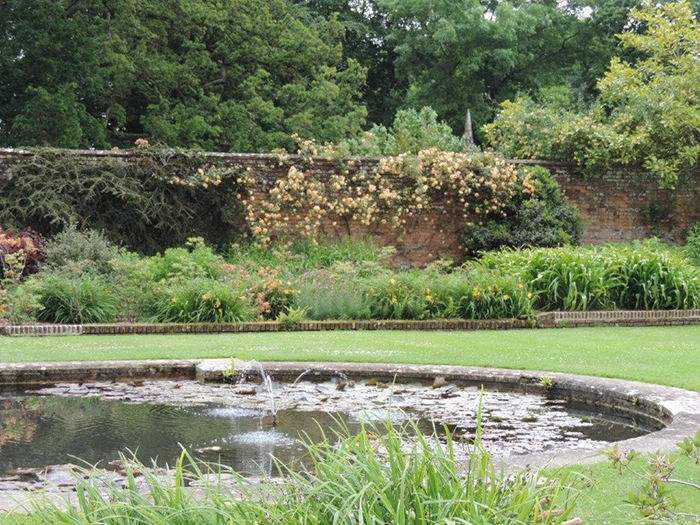 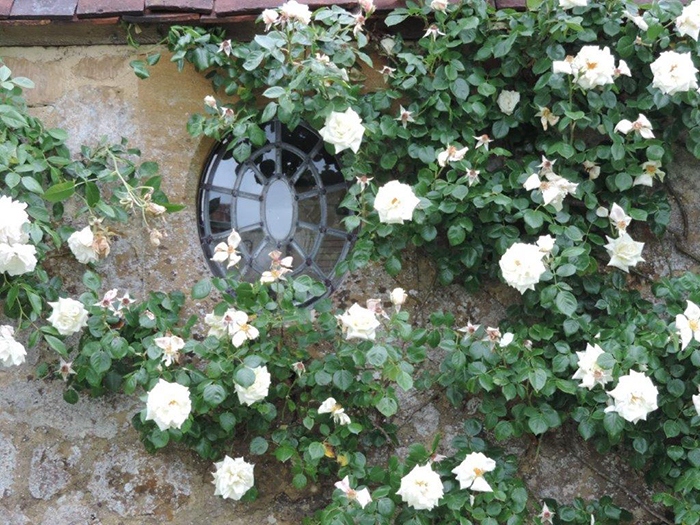 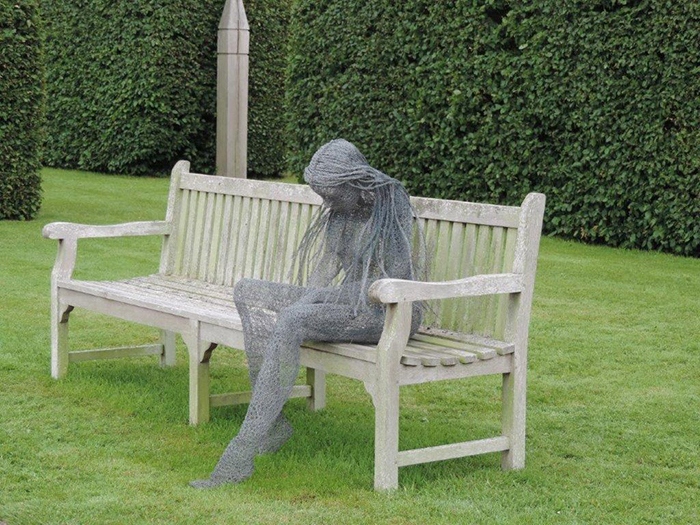 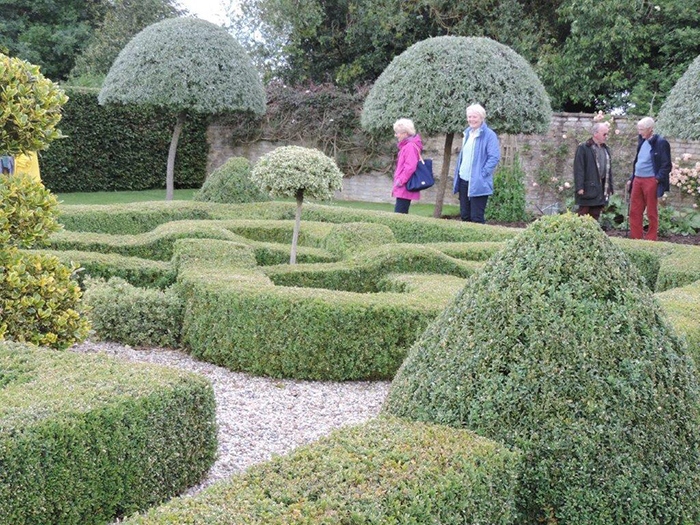 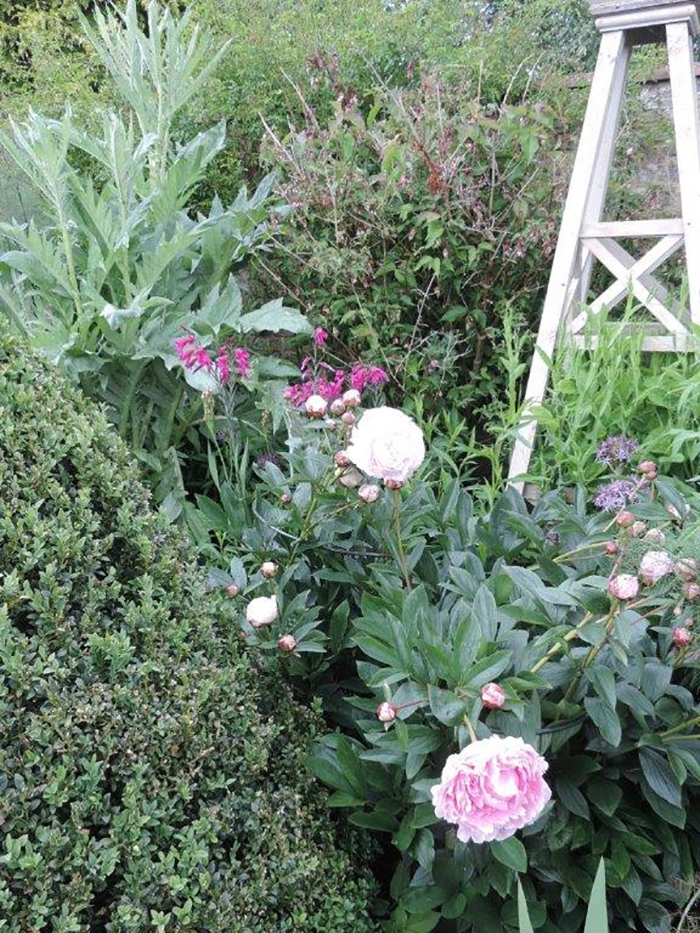 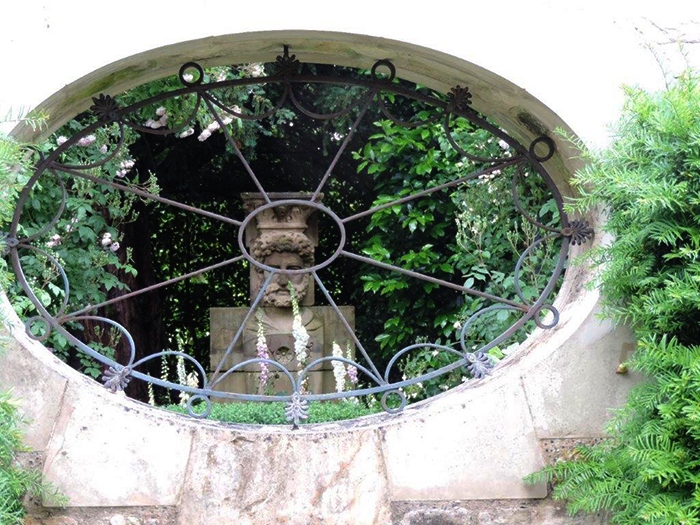 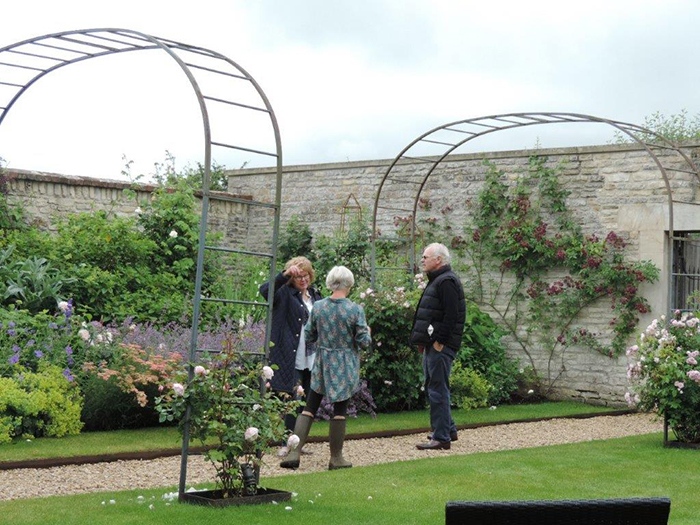 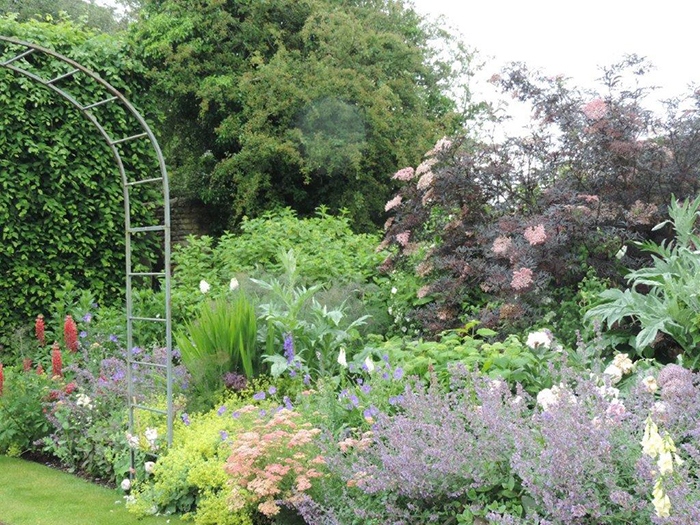 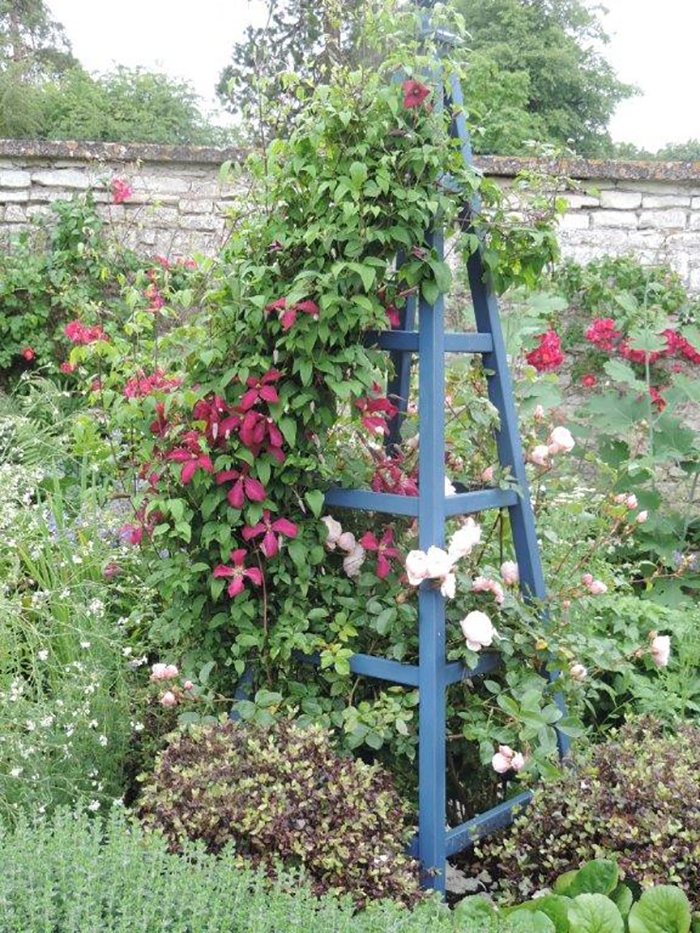 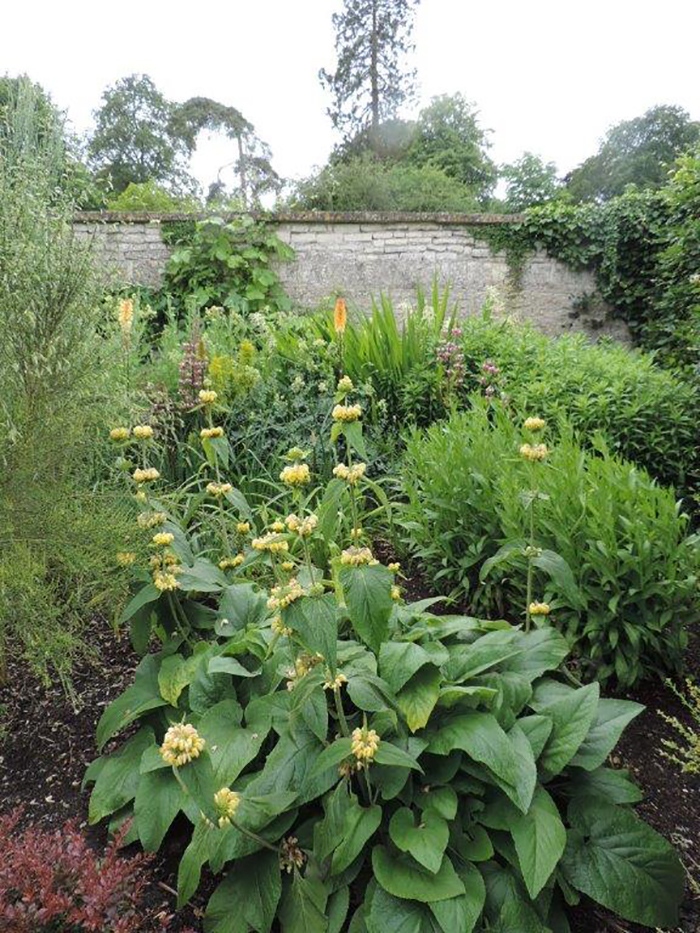 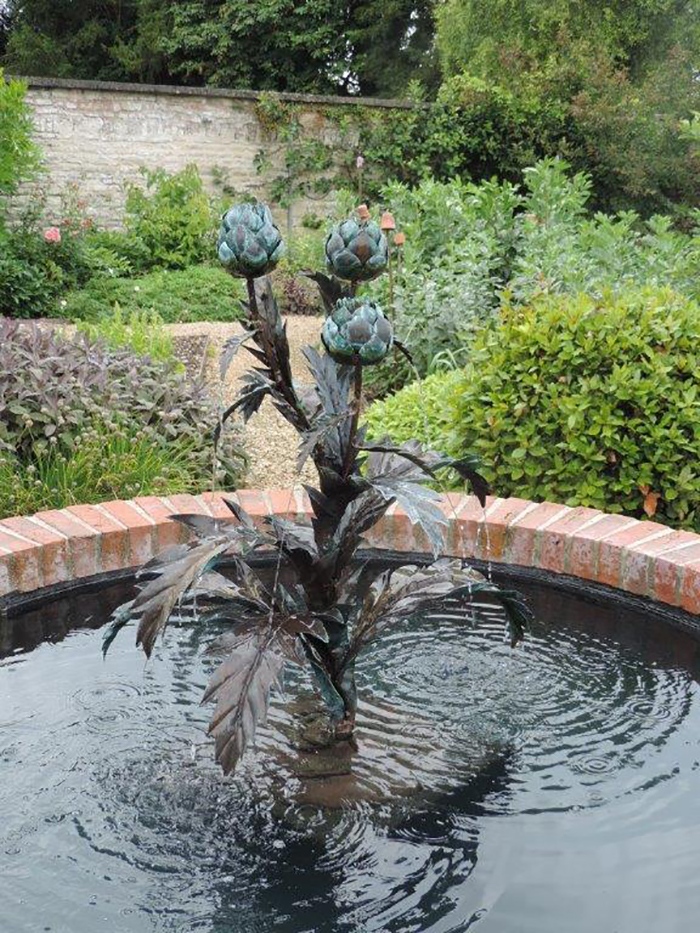 After a less than wonderful supper in the Cellarium Café we gathered in the dimly-lit cloister from where we were lead into the nave to begin our tour of the Abbey, now empty of tourists.  Once seated our guide told us of its Benedictine origins, its history and political associations and then the choir sang the first of their chosen pieces for the evening.

From there we went through to the Quire with its Victorian screen, the Lectern and rose windows of the transepts, to the Sanctuary and St. Edward’s Chapel, with tombs of five kings and three queens, not to mention the remains of the saint – a rarity in post Reformation Britain.  Our guide linked the history of the building with the social and royal history of first England and then Britain, from the tenth to the twenty-first centuries.  As the glories of Early English gothic architecture were revealed the choristers sang a Kyrie, music by Handel (whose memorial in Poet’s Corner includes the portrait taken from his death mask).  Seventeen monarchs from Edward the Confessor, Richard II, Elizabeth I (whose tombs sits over Mary Tudor), the Honovarians and their consorts, represent our nation’s history of war, rivalry, statesmanship, dynasty and personal tragedy.  Architecturally, the most amazing is the fabulous fan vaulting of Henry VII’s chapel with its perpendicular pendants of the Knights of the Order of Bath.  Not only were we treated to more music but also to a rendition of Shakespeare’s famous speech of Henry V’s rallying cry.

From there we moved to Poet’s Corner which houses the memorials and tombs of some of the greatest writers, musicians, statesmen and scientists that the world has known.  In Chaucer, Purcell, Newton, Wilberforce, Dickens, Darwin and Elgar to name but a few, we were reminded of our rich cultural heritage.

We then came back to the Nave where we were given an organ recital followed by Arthur Sullivan’s The Long Day Closes.  Our final stop was by the tomb of the Unknown Warrior where the Choir sang its final piece – a Russian traditional song – Give rest, O Christ.

We felt hugely privileged to be in the Abbey for such a tour and all felt we would like to go back on a summer’s evening with the sun shining through the stained glass windows so that we could not only see the windows of the transept but Hockney’s window and the new upstairs gallery.

After a long coach trip we arrived at our very good hotel in The Hague where, after a quick freshen up, we were given a delicious dinner. The next morning we set off to visit the Panorama Mesdag which I think proved to be the biggest surprise of the trip. It is a cylindrical painting over 14 metres high and 120 metres in circumference and depicts scenes of dunes and Scheveningen village. You view the painting from the inside and it is difficult to tell where real sand ends and the painting begins. The rest of the day was spent in Keukenhof viewing the spectacular tulips along with a few thousand other people. I think we all agreed we were glad we had done it but never again as it was just too crowded. The next morning we had a guided tour of the Maruitshuis in The Hague which is known as the Royal Gallery of Paintings.  It has recently been reopened after a major renovation and is home to masterpieces by Rembrandt, Frans Hals, Rubens, Van Dyck and of course Vermeer with his Girl with a Pearl Earring.  The afternoon was spent at the porcelain factory at Delft which proved to be a disappointment with an inexperienced guide and again too many people.  Luckily we had time to go into Delft itself which was lovely and we wished we had spent the whole afternoon there rather than waste time at the porcelain factory.

Our third day in The Netherlands took us to Amsterdam and the Rijksmuseum where as at the Maruitshuis, we had very good guides who picked out a small number of choice paintings to show us including Rembrandt’s The Night Watch.  After some free time we went on a cruise to see some of the city’s architecture from the canals.  As this was our final evening the majority of us enjoyed an Indonesian Rice Tafel.

Leaving early the next morning we had time to stop in Bruges for a couple of hours.  Sadly our luck on the weather ran out and it poured with rain but most of us managed to see some of the city and have a good lunch. You can find details of our June on-line lecture, Beethoven at 250 by Sandy Burnett by following the Lecture menu tab.